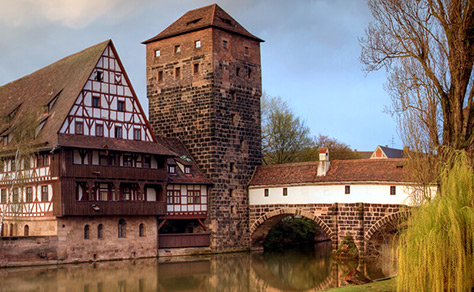 Go off the beaten path from Vienna to Nuremberg to Prague and uncover the scenic wonders and remarkable histories of the cities that rest along the Danube. As your adventure starts, castles, stunning architecture, natural wonders and rich history ensue. Enjoy the great outdoors and bespoke experiences along the Danube in cities that inspired fairy tales. Prague boasts Hradčany, the biggest, and arguably the most extraordinary, castle in the world, and an Old Jewish Quarter that’s witnessed both hardships and celebrations for centuries. Discover the old walled city and Nuremberg’s mesmerizing castles on the Nuremberg Panoramic City Tour. Confront and explore the region’s complicated and devastating history as you visit infamous Nazi documentation centers and party rally grounds. Stroll through countless enchanting old towns and villages, with plenty of “Let’s Go” opportunities for hiking and biking in Regensburg, Straubing, Deggendorf, Vilshofen, Passau and Engelhartszell – all teeming with magnificent architecture, age-old tradition and outstanding breweries. Explore Weissenkirchen and its devastatingly-beautiful landscapes. Participate in a “Village Day,” and stroll through towns accompanied by wine, apricot treats and a vineyard hike. In the historical capital of Vienna, you’ll be met with glorious food, wine, art and outdoor experiences all on your search for new inspiration along the Danube. Generations Family Program (select sailings): Share the enchantment of this region with the special young people in your life. These cruise/tours not only feature unique, fun-filled adventures for families to enjoy together, they’re also packed with culturally and historically significant experiences designed to spark creativity and lifelong learning.
Request More Information

Arrive at Václav Havel Airport Prague. If your cruise/tour package includes a group arrival transfer or if you have purchased a private arrival transfer, you will be greeted by a Uniworld representative and transferred to the hotel.

Prague has been a magnet for artists, writers, scientists and composers for centuries. It also boasts great beer, a lively art scene, stunning castles and up-and-coming fashion designers, making it a fun as well as a beautiful place to visit.

Transfer from your hotel in Prague to your ship in Nuremberg.

A new day brings new experiences in the “City of Three Rivers,” Passau, where the Danube, Inn and Ilz rivers join together, at one time bringing an influx of wealth and culture into the region.