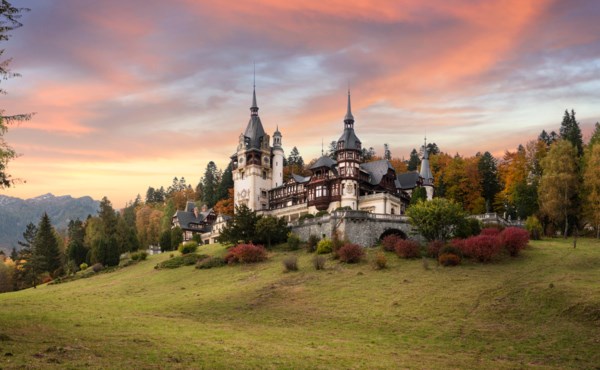 Experience the highlights of Eastern and Western Europe, then dive into the mystique of the Dracula myth on a private train journey through Romania. Lend your European adventure a layer of mystique on a luxury private train through the country that inspired the myth of Count Dracula. Amongst spectacular scenery and fascinating local cultures, you’ll trace the legend back to Romania’s infamous Vlad the Impaler. Visit his castle, as well as the real-world castle upon which Bram Stoker based his eerie depiction of Dracula’s home. The shimmering waters of the fabled Danube River flow for thousands of miles through the very heart of Europe, silent witness to centuries of artistic achievement and historical events. This perfectly composed journey provides an immersive cultural tasting menu of four equally beguiling countries—ideal for first-time river cruisers as well as seasoned globetrotters seeking to experience yet another dimension of these much-loved destinations. Our locally-based destination experts will take you well beyond the “must-sees” of each region, offering fresh takes on classic sites, insider knowledge of delightful under-the-radar locales, and VIP access to places only a privileged few will ever experience—such as a private early-morning viewing of the acclaimed art collection of the Kunstkammer Vienna. A veritable showcase of the best of Central Europe, this journey is one any culturally curious world explorer will love, featuring old-world capitals and charming towns and villages.
Request More Information

Arrive at Munich Airport. If your cruise package includes a group arrival transfer or if you have purchased a private arrival transfer, you will be greeted by a Uniworld representative and transferred to the ship.

Passau is a crossroads in more ways than one, as three rivers meet here and three nations nearly do, making for a fascinating cultural mosaic. Get to know the town and its main claim to fame—Europe’s largest pipe organ—or “Let’s Go” with an invigorating riverside hike or bike ride.

Mozart’s birthplace of Salzburg is nestled in a glorious alpine setting that sparkles like a winter wonderland. Linz may be best known for its famous Linzer torte, but it’s also a hotbed for the arts. See the sights with a local expert and visit a family at their farm in the countryside. Austria’s third-largest city, Linz boasts a long history of trading and textile manufacturing, but these days it is perhaps best known for its electronic arts and annual festival.

This morning, visit the 900-year-old Melk Abbey and its extraordinary baroque-style library.

Vienna is a cultural treasure trove revered for its art and music (and sinfully rich pastries). Experience the “City of Waltzes” with your choice of tours, as well as an expertly led tour of an extraordinary collection of art at the renowned Vienna Art History Museum.

Your ship sets sail from Vienna and heads for Bratislava today. You may relax onboard all day, perhaps enjoying a drink on the Sun Deck and taking in the scenery as the ship wends its way along the Austrian Danube toward Bratislava. Although it’s not a large city, Bratislava has played a leading role in the politics and culture of the region for many centuries, and it is well worth a visit.

Budapest is an enchanting city that presents a vibrant mix of medieval and modern.

Transfer from the ship to Budapest Nyugati station, where you can enjoy a morning drinks reception in the impressive Royal Waiting Room before boarding the Golden Eagle Danube Express. Settle into your cabin and later enjoy lunch as the train heads to Lajosmizse for a spectacular ‘Puszta’ horse show. Afterwards there is time to explore Kecskemét, a fascinating city at the geographical center of Hungary.

After breakfast onboard, your train will arrive in the 13th-century town of Sibiu, Romania, where you will spend the morning touring the area. Reboard for lunch as your train travels to Sighișoara for a guided walking tour of the town’s main highlights. A World Heritage Site and the rumored birthplace of Dracula, it is one of the best-preserved fortified medieval towns in Europe. Burgher houses and ornate churches line its cobbled streets.

Early morning will find you at Sinaia, where you’ll detrain after breakfast and travel the short distance to the stunning neo-Renaissance Peles Castle. Stop for lunch on the train before moving on to Brasov for a tour of the medieval Old Town, then head out to the Rasnov Citadel and Castle.

Arrive in Cluj-Napoca in the early morning. An 800 year-old city that was the capital of Transylvania during its independence, Cluj-Napoca became an “unofficial capital” when Transylvania was annexed into Romania. The city is built on the banks of the Somesul river at the edge of the Apuseni Mountains.

Disembark the train and transfer to Budapest Ferenc Liszt International Airport for your flight home.
Need more information?
Having trouble deciding which cruise is right for you?
Call Us Today at 1.888.804.CRUISE (2784)
Back To Itineraries