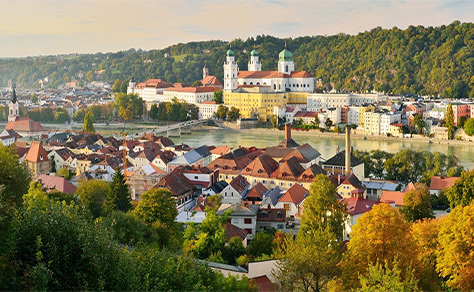 Authentic experiences and local encounters are in store on your cruise along the most scenic parts of the Rhine, Main and Danube rivers. Delight in the full spectrum of Europe’s culture, history, art, architecture, cuisine and numerous UNESCO World Heritage sites resting along some of the most legendary rivers. Discover Germany’s splendidly quaint villages, towns, prominent landmarks and the region’s best wine. Sail along scenic rivers and keep count of the castles jutting out of the landscapes. Step off your ship into fairytale-like settings where you’ll find countless opportunities for “Let’s Go” hiking, biking and walking tours from city to city. Sample local specialties, from crisp Rieslings to brandy spiked Rüdesheimer coffee. Visit the pastel-hued Melk Abbey, perched magnificently on a hill overlooking the river, and see its famous library. Tour the halls of some of Europe’s grandest buildings, the Würzburg Residence and the Hofburg Palace. You’ll enjoy nothing short of a treasure trove of experiences from Amsterdam to Vienna. Rhine, Main & Danube Discovery is a combination of Authentic Danube and Classic Germany & Amsterdam.
Request More Information

Transfer from Vienna International Airport to your ship. If your cruise package includes a group arrival transfer or if you have purchased a private transfer, you will be greeted by a Uniworld representative and transferred to the ship.

A new day brings new experiences in the forest-lined district of Engelhartszell. Experience Germany’s great outdoors by biking along the Danube River. Arrive in the afternoon at the “City of Three Rivers,” Passau, where the Danube, Inn and Ilz rivers join together, at one time bringing an influx of wealth and culture into the region.

Enjoy a day of leisure exploring beautiful and historic Nuremberg.

Bamberg in its entirety is not only described as beautiful but has often been regarded as one of Germany’s most attractive settlements, with its ravishing architecture, intersecting canals and rivers, and charming stores and restaurants, all framed by rolling hills.

Your day brings you to Volkach and the heart of the Franconian wine country. It’s a region full of overwhelming natural beauty, rooted communities, marvelous flavors and villages that have been making wine for countless generations. Explore the town and its surrounding countryside.

The opulent Würzburg Residence, a UNESCO World Heritage Site, offers a true sense of the region’s history through the European Renaissance. It even contains the world’s largest ceiling fresco by Tiepolo. Visit the Residence and its carefully restored gardens or get outdoors and enjoy a scenic hike around Festung Marienberg, a prominent landmark that was previously home to a long line of prince-bishops.

The perfect German town calls for a day full of quintessential German experiences. Resting on the left bank of the Main, Miltenberg is classically quaint with its charming squares, farmland, biking and pedestrian paths, impressive castles and one of Germany’s oldest inns.

Your floating hotel arrives in Rüdesheim, one of the most charming ports of call in the Rhine Valley. This city has a long history going back to Roman times and is famous for the Drosselgasse, a narrow, bustling lane of shops and wine bars, as well as its impressive Niederwald Monument.

Today you’ll experience the many treasures of Cologne on a stroll that will take you to the Old Town, an area rich in history and architecture, featuring 12 Romanesque churches and stunning remnants of the town’s medieval past.