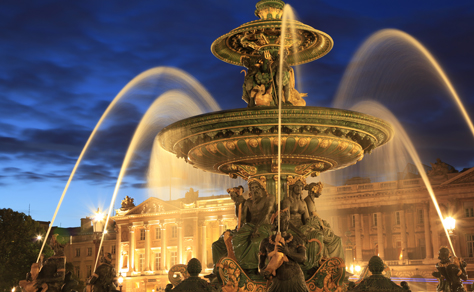 The perfect journey for travelers seeking the crème de la crème of France. This triumvirate of France brings you the very best of each region—Paris and the Normandy coast in the north, vineyard-rich Bordeaux in the southwest and the sun-drenched Mediterranean delights of Burgundy and Provence. You’ll tour glamorous capital cities in leisure and style, explore ancient villages still unspoiled by modern life and walk in the footsteps of famous artists such as Monet and Van Gogh. With Uniworld’s extraordinary excursions, you’ll visit the Palace of the Popes in Avignon, taste incomparable wines in Bordeaux, stroll the charming medieval lanes of Viviers and peruse the famed farmers’ market in Lyon before seeing the city spectacularly illuminated at night. All the while, savor the renowned wines and cooking traditions that have made French cuisine the most revered in the world. Who will enjoy this cruise? Those who want to experience all that France has to offer, from decadent food and wine to breathtaking scenery and world-famous art and architecture. Ultimate France is a combination of Paris & Normandy, Brilliant Bordeaux and Burgundy & Provence.
Request More Information

Arrive at Bordeaux-Mérignac International Airport. If your cruise package includes a group arrival transfer or if you have purchased a private arrival transfer, you will be greeted by a Uniworld representative and transferred to the ship.

The Route de la Corniche Fleurie…could this be the most beautiful road you’ve ever traveled? Find out today on the drive to Blaye Fortress, passing through one impossibly picturesque hamlet after another. Once you arrive, you’ll find your center with a unique and expertly led yoga session in the heart of this historic fortress, a UNESCO-designated citadel that once protected Bordeaux from attacks by sea.

The legendary Médoc region abounds with prestigious wine châteaux in a dizzying array of architectural styles, as well as miles of grapevines stretching to infinity. Take a scenic drive through the storied Médoc wine route, followed by a wine tasting at a beautiful wine estate. Enjoy the waters of the Garonne River and the Gironde Estuary before heading to the pretty town of Pauillac, gateway to the storied Médoc wine route, the Atlantic coast and remnants of the Atlantic Wall erected during WWII.

The French phrase “la douceur de vivre” is an accurate description for your time in Cadillac, known for its deliciously flavored dessert wines. Visit Château Royal de Cazeneuve, site of Henry IV’s and Queen Margot’s tempestuous love. Meet the owner around a glass of Sauternes in the reception hall.

The medieval town of Saint-Émilion is an ideal place to linger. Wander its cobblestone lanes lined with wine shops and bakeries, and stop to admire the amazing rock-hewn church that extends beneath the city’s streets. Another treasure awaiting you underground? A wine tasting in the cellars of a Grand Cru estate. With Libourne as your base, travel to nearby breathtaking Saint-Émilion and immerse yourself more deeply in the region’s history and wine culture.

France’s rich agricultural tradition is the heart and soul of the region’s exquisite cuisine—and what better way to get a taste for the freshest vegetables, cheeses, breads and fruits than with a visit to Libourne’s lively farmers’ market?

Discover Bordeaux’s many charms today, either on foot with a local expert or on two wheels—the locals’ preferred way to navigate the city’s charming backstreets. You have a wonderful selection of active opportunities to see this magnificent UNESCO World Heritage Site.

Disembark the breathtaking S.S. Bon Voyage and transfer to Paris via high-speed, first-class TGV train. Your next ship, the magical S.S. Joie de Vivre, waits to carry you along the Seine on the next leg of your adventure.  Note: Ship schedule and order of sightseeing may change throughout the itinerary. Tour to port of destination by motorcoach and substitute visits to other sites may occur during your trip due to the impact of water levels, closures because of public holidays or other uncontrollable factors.

You’ll transfer from the magical S.S. Joie de Vivre in Paris to the striking S.S. Catherine in Lyon via high-speed, first-class TGV train for the final leg of this fabulous grand tour. Once you’ve settled into your new home, you’ll have some time to explore delightful Lyon, which is nestled alongside the Saône River.