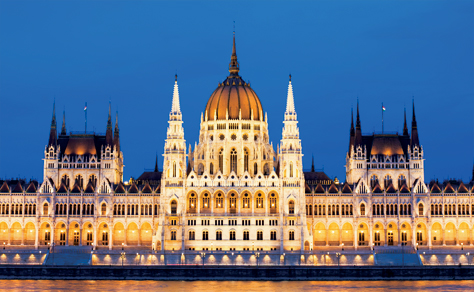 Discover the best of Europe on one grand journey from the North Sea to the Black Sea. For centuries, people have dreamed of linking the great rivers of Europe, making it possible to travel by water across the continent between the Black and North seas. Today that dream is a reality. Prepare for the cruise of a lifetime as you travel the length of Europe through eight nations, exploring wonders of the Old World and the New, the East and the West. Sail the romantic Rhine, the serene Main and the captivating Danube, witnessing dazzling natural beauty and incomparable architectural feats. Visit no fewer than five capital cities (Amsterdam, Vienna, Budapest, Belgrade and Bucharest) and a dozen towns and villages, with time to explore each. Enjoy numerous UNESCO World Heritage sites, including the castle-dotted Upper Middle Rhine Valley and magnificent Cologne Cathedral. From Amsterdam to Bucharest, you’ll visit the best of Europe with its spectacular architecture and stunning history on this truly remarkable journey. Who will enjoy this cruise/tour? Travelers wishing to discover Europe’s past and present, from east to west, Amsterdam to Bucharest, on one astonishing journey. Ultimate European Journey is a combination of Highlights of Eastern Europe and European Jewels.
Request More Information

Arrive at Bucharest Henri Coandă International Airport. If your cruise/tour package includes a group arrival transfer or if you have purchased a private arrival transfer, you will be greeted by a Uniworld representative and transferred to the hotel.

Bucharest is a fascinating combination of Communist grandiosity, elegant French-influenced 19th-century buildings and surprising survivors dating from the 1500s. Today in Bucharest you’ll enjoy a panoramic city tour or a walking tour in the old Lipscani district. Later, you'll travel via motorcoach to Giurgiu, where your ship awaits.

Today’s main attraction will be the spectacular scenery along the Danube, as you cruise a stretch of gorges known as the Iron Gates. Later, head ashore to explore a Paleolithic site and an extraordinarily well-preserved medieval fortress. All along the way, history lines the banks of the river. Keep an eye out for Trajan’s Plaque, which the ancient Romans erected to commemorate the road they anchored in the steep cliffs above the water, and Golubac Castle, built in the 14th century and attacked successively by the Serbs, Magyars and Turks.

Welcome to Croatia! This ancient country, which has made a remarkable recovery from a brutal civil war, is noted for its beautiful countryside and thriving folk traditions, as well as simple, delicious local rustic food. You’ll dock in Vukovar, Croatia’s biggest port, at the confluence of the Danube and Vuka rivers.

Other passengers are heading home today, but you are only halfway through your marvelous holiday. Today you are invited to enjoy a full-day visit to Hungary's Eger wine region for some lunch and, of course, wine tasting.

Today is your day to relax onboard, enjoying the luxuries of your river cruise ship while soaking in the spectacular scenery all around you as your ship heads for Vienna. Come up to the Sun Deck to admire the city’s landmarks strung along the riverbanks.

Awaken to the spectacular scenery of the Wachau Valley, one of the most beautiful stretches of river landscape in all of Europe. Named for its white church, Weissenkirchen may very well be the prettiest village in the Wachau Valley. A local expert will show you around and introduce you to some regional delicacies, including a wine tasting. Prefer to go for baroque? Visit the 900-year-old Melk Abbey and its extraordinarily opulent library. Later, you can stretch your legs with a vineyard hike.

Just before reaching Passau, the ship will pass through the famous Schlögener Schlinge—a “gooseneck” or hairpin turn in the Danube. Located at the confluence of three rivers—the Danube, Inn and Ilz— Passau is well known for its ornate baroque cathedral. Today, the city is unusually well preserved, having been spared the brunt of Allied bombing during WWII, as you’ll see on your walking tour.

Arrive in the archetypal medieval German city of Nuremberg. Nuremberg is justifiably famous for its gingerbread and pocket watches, and it was also the site of some key moments in 20th-century history. You’ll choose between two memorable ways of exploring this exceptional city. You can hop aboard a motorcoach and “Do as the Locals Do,” or you can accompany a local expert to the city’s most important WWII sites, including the enormous Nazi Party Rally Grounds—the actual site of the Nazi Party rallies.

After today, you may never eat a pretzel again without thinking of the town of Wertheim. You’ll meet one of Germany’s best pretzel makers, as well as the owner of a historic wine estate. If you’re more in the mood for a scenic bike ride, you are welcome to do that as well.

Frankfurt is known as the “Mainhattan” of Europe due to its profusion of bankers and soaring skyscrapers, which coexist with the city’s traditional Old Town architecture. Choose a brief tour that gives you an overview of this major European financial and trade center. Alternatively, visit romantic Heidelberg and its Renaissance castle.

Experience Germany’s fabled Rheingau in one of two ways today. Take in spectacular views of the region’s famous vineyards from the perspective of an aerial cable car, or venture within an atmospheric medieval monastery and taste the Rieslings made on site. The town is best known for its narrow avenue of shops and wine bars called the Drosselgasse. Experience the most spectacular scenery on the Rhine later in the afternoon as you cruise past the famous Middle Rhine Valley.