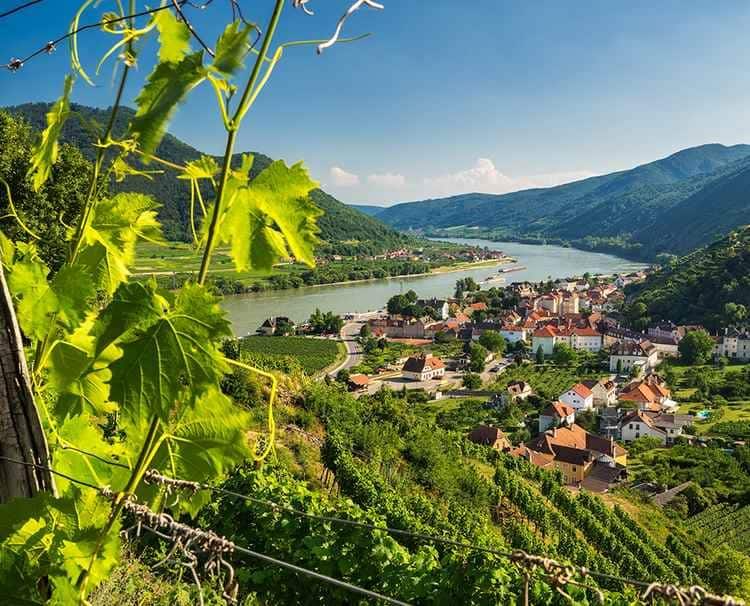 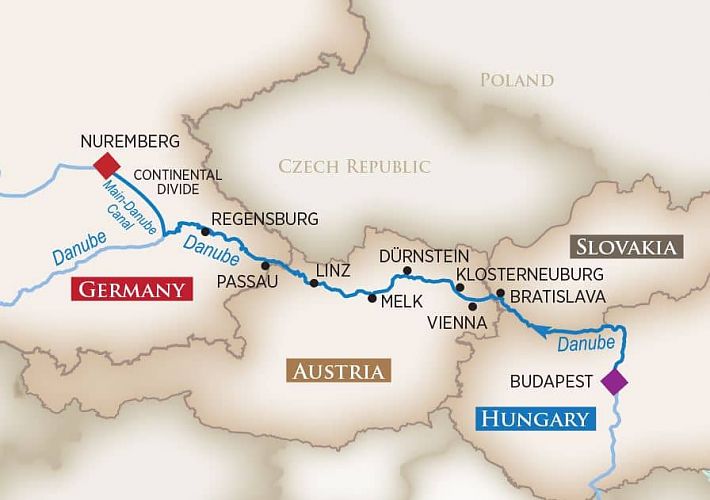 Discover a wealth of art, history and cultural treasures as you cruise to some of Europe’s most famous destinations. From Budapest, journey to Vienna, Passau and the 2,000-year-old town of Regensburg, a UNESCO World Heritage Site. Along the way, visit magnificent cathedrals and Baroque abbeys, sample Vienna’s sinfully rich sachertorte cake, experience the breathtaking scenery of the Wachau Valley winemaking region and traverse Europe’s Continental Divide.
Request More Information

Board the ship for your Blue Danube Discovery cruise. (D)

Host to the crowning ceremonies of 11 Hungarian kings and queens between 1536 and 1830, Bratislava certainly has earned the title “Coronation City of Kings,” as you’ll discover during your walking tour. Or join a special “Tastes of Slovakia” tour. For a more active adventure, hike up to Bratislava Castle, offering magnificent views of the city. (B,L,D)

The “City of Waltzes” offers a treasure trove of gems and your city tour showcases its regal splendors, including the majestic Opera House and the former Imperial Palace of the Habsburgs. Conclude your tour in Vienna’s historic city center, a UNESCO World Heritage Site, and then visit St. Stephen’s Cathedral. For a more active exploration of the area, take a guided bike ride. During the afternoon, enjoy leisure time exploring this iconic city even more. (B,L,D)

After reaching the Wachau Valley in the morning, you’ll have a choice of three excursions in Dürnstein. Partake in a walking tour along cobblestone streets to the luminous blue façade of the Baroque Stiftskirche, with its famed church tower, before enjoying a wine tasting in a local cellar. Visit a local boutique, where you’ll be treated to the region’s finest apricot products. Alternatively, for a beautiful view of the Wachau Valley, hike up to the fortress where Richard the Lionheart was once held. After your morning excursions, you have the choice to cruise through the Wachau Valley to Melk or join a bike tour along the Danube. Upon reaching Melk, take a tour of the UNESCO-designated Melk Abbey. (B,L,D)

Enjoy a scenic morning sailing to the medieval city of Passau. Join a walking tour through this 2,000-year-old city, noted for its Gothic and Italian Baroque architecture and St. Stephen’s Cathedral. Guests looking for a more active morning can choose between a guided hike up to the Veste Oberhaus Fortress overlooking Passau or a guided bike tour along the Inn River. (B,L,D)

Explore Regensburg, one of Germany’s best preserved medieval cities and a UNESCO World Heritage Site, on a guided walking tour showcasing the city’s architectural highlights, including the Old Town Hall and the Porta Praetoria, gates to an ancient Roman fort built in 179 A.D. As an alternate option, sample some of Bavaria’s specialties—beer, sausage and pretzels; or bike to Walhalla where you’ll see the neoclassical white marble temple inspired by the Parthenon in Athens. (B,L,D)

Enjoy a scenic morning cruise as the ship crosses the Continental Divide via the Main-Danube Canal to Nuremberg. Explore the medieval city center with a tour that showcases the Imperial Castle and the famous town wall, as well as Albrecht Dürer’s home and Market Square with its legendary fountain. Or you can take a guided tour of the city’s WWII history, including a visit to the infamous Zeppelin Field, a museum built on the site of former Nazi rallies and the site of the Nuremberg Trials when not in session. Alternatively, savor traditional Franconian specialties by sampling famously delicious Nuremburger Bratwurst, Rot bier (red beer) and Lebkuchen (gingerbread). (B,L,D)

Bid farewell to Nuremberg and prepare for your flight home. (B)
Need more information?
Having trouble deciding which cruise is right for you?
Call Us Today at 1.888.804.CRUISE (2784)
Back To Itineraries