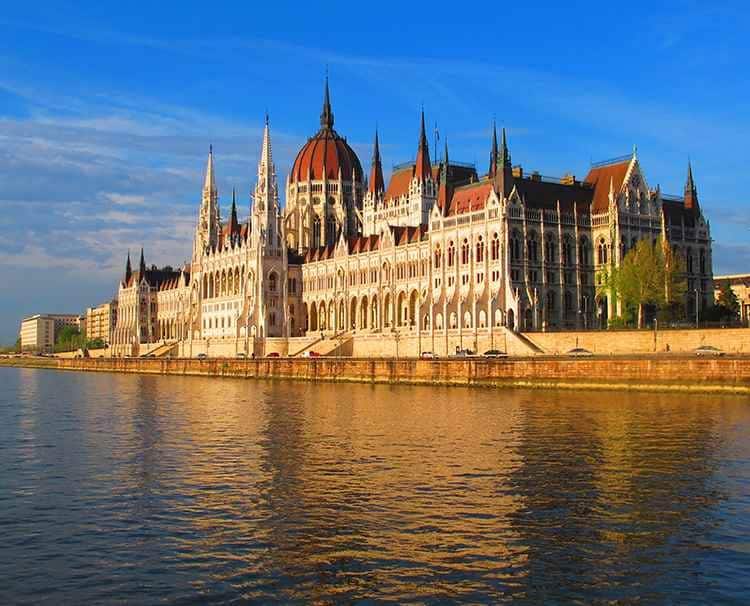 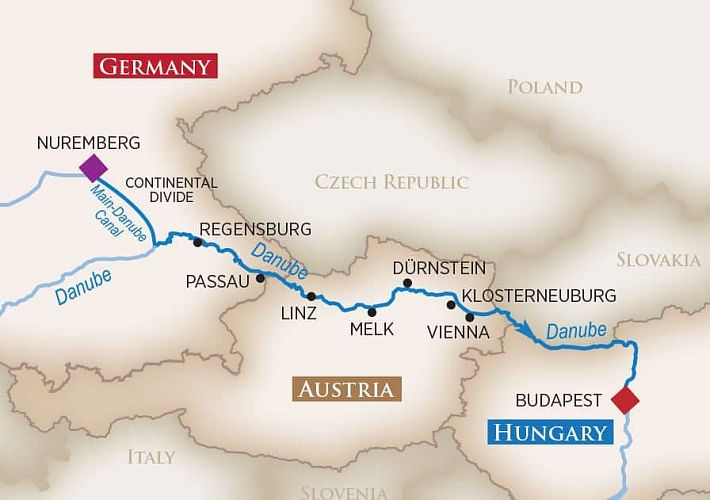 Delve into Europe’s history starting in the perfectly preserved medieval city of Nuremberg and concluding in Budapest. In between, cruise through the man-made marvel, the Main-Danube Canal, across the Continental Divide and through the UNESCO-designated Wachau Valley. Explore medieval Regensburg and visit Vienna where imperial dynasties built a harmonious blend of architectural wonders. Throughout your journey, get a feel for the land by biking and hiking, and sampling delicate wines and hearty beers.
Request More Information

Board your ship for your Legendary Danube cruise. (D)

You have three choices of excursions while in Nuremberg. Enjoy a guided tour through Nuremberg’s beautiful medieval city, showcasing the Imperial Castle, famous town wall and the legendary fountain of the Market Square. Or turn back the pages of a darker history with a guided tour of the city’s most important WWII sites, including the enormous Documentation Center Nazi Party Rally Grounds. You’ll also visit the Nuremberg Trials Memoriam, and Courtroom 600, if the courtroom is not in session. Alternatively, savor traditional Franconian specialties by sampling famously delicious Nuremburger Bratwurst, Rot bier (red beer) and lebkuchen (gingerbread). En route to Regensburg, you’ll cruise through the man-made marvel, the Main-Danube Canal. (B,L,D)

Explore one of Germany’s best preserved medieval cities, Regensburg, on a guided walking tour showcasing the city’s architectural highlights, including the Old Town Hall and the Porta Praetoria. Alternatively, sample some Bavarian specialties—beer, sausage and pretzels, and for those who wish to be more active, join a bike tour to Walhalla where you will see the neoclassical white marble temple inspired by the Parthenon in Athens. (B,L,D)

Enjoy a walking tour along Passau’s cobblestone streets admiring the Gothic and Italian Baroque architecture and St. Stephen’s Cathedral. For guests looking for a more active morning, you can choose between a guided bike tour along the Inn River, or a guided hike up to the Veste Oberhaus Fortress for panoramic views overlooking three rivers. Later in the day, set sail for Linz. (B,L,D)

Explore Melk, known for its magnificent Benedictine Abbey, a UNESCO World Heritage Site and one of Europe’s largest and most revered monasteries. Within these walls you will find frescoes painted by Johann Michael Rottmayr and Paul Troger, as well as a famed collection of musical manuscripts. Alternatively, you can go on a walking tour along Dürnstein’s cobblestone streets to the Baroque Stiftskirche, with its famed church tower, or join a guided bike tour that takes you through the UNESCO-designated Wachau Valley. Later in the day, set sail through the vineyard-rich Wachau Valley. (B,L,D)

The “City of Waltzes” offers a treasure trove of gems and on your city tour, you’ll see many of them, including the majestic Opera House and the former Imperial Palace of the Habsburgs. Conclude your tour in Vienna’s historic city center, a UNESCO World Heritage Site, and then afterwards, visit the grand St. Stephen’s Cathedral. For a more active exploration of the area, discover Vienna on a guided bike tour. During the afternoon, spend leisure time exploring this iconic city even more. (B,L,D)

You cannot help but fall in love with Budapest, known as the “Queen of the Danube.” Your city tour begins with a visit to the vibrant Great Market Hall brimming with vendors selling everything from food to souvenirs. The remainder of this tour takes you to both the Buda (hilly) and the Pest (flat) sides of the river. As an alternative choice, hike up to Castle Hill for breathtaking views of the city below. (B,L,D)

Bid farewell to Budapest as you prepare for your flight home. (B)
Need more information?
Having trouble deciding which cruise is right for you?
Call Us Today at 1.888.804.CRUISE (2784)
Back To Itineraries