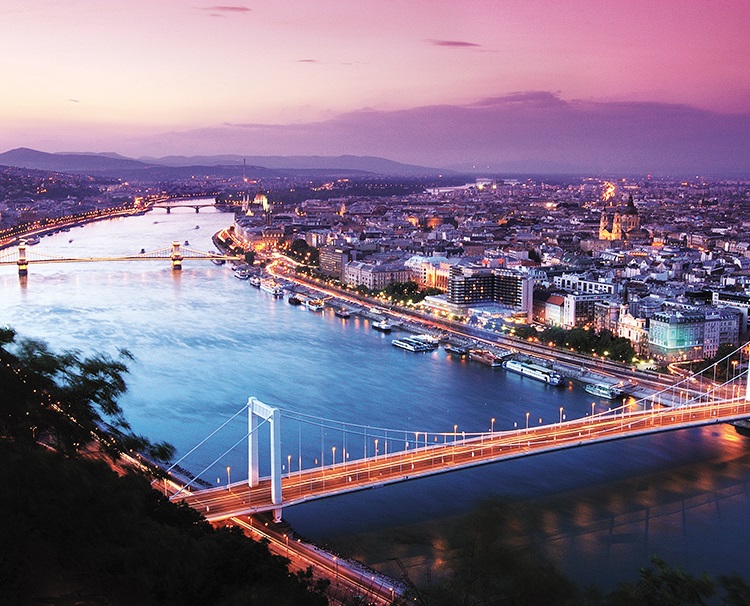 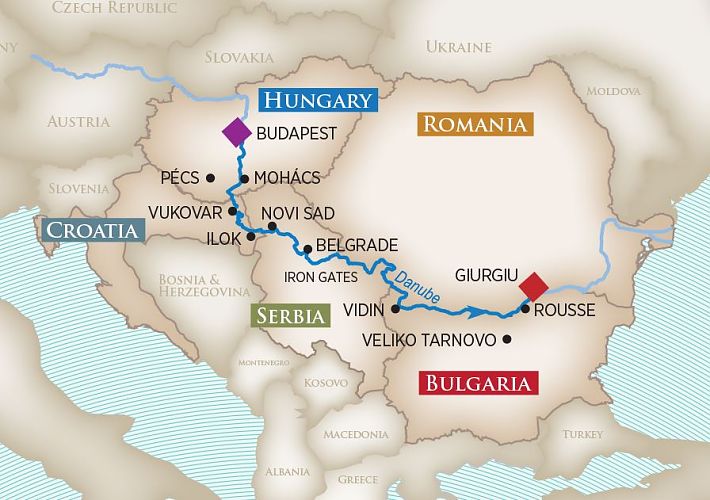 Embark the ship in Giurgiu for your Gems of Southeast Europe cruise.

Experience more of Bucharest, or visit Bulgaria’s ancient capital, Veliko Tarnovo, with its medieval fortress and multiple orthodox temples. You can opt instead to explore Rousse, known for its 19th- and 20th-century Neo-Baroque and Neo-Rococo architecture, and then afterwards visit the UNESCO-designated Rock-Hewn Churches of Ivanovo with frescos revealing exceptional artistry of 14th-century paintings. (B,L,D)

Explore Vidin, one of Bulgaria’s oldest cities, and surrounding areas with a choice of excursions. Discover Baba Vida Fortress, the largest preserved medieval castle in Bulgaria. Continue on to Belogradchik, one of Bulgaria’s natural wonders, where you can hike around its most spectacular rock formations. Alternatively, visit a local home for a demonstration of traditional Bulgarian yogurt and Banitsa, a pastry you will also get to make. You also have the choice to bike through Vidin and to the castle. Later, you’ll enjoy a wine tasting at a local winery in the city of Calafat. (B,L,D)

The Iron Gates are some of Europe’s most awe-inspiring natural wonders. The Danube narrows as it winds through a series of magnificent gorges between the Carpathian and Balkan mountains, forming a natural border between Serbia and Romania. The ancient King Decebalus, the last king of Dacia, is proudly carved into the mountainside and always captivates travelers. After your scenic cruise, you will arrive at Golubac Fortress – one of the best preserved medieval fortresses in Europe – for a tour. (B,L,D)

Explore Serbia’s capital, Belgrade, on a city tour, which includes the Kalemegdan Fortress and the Serbian Orthodox Temple of St. Sava. Or visit the Royal Palace – the official residence of the Serbian Royal Family – and tour the House of Flowers, the mausoleum of Marshal Tito, who became the first President of Yugoslavia; or hike to Belgrade Fortress. In the afternoon, enjoy a taste of the region by sampling Serbian plum brandy, Šlivovitz, and delicious local delights at the Quburich Distillery. Alternatively, journey to the Podrum Panajotovic Wine Cellar, where old traditions and excellent wine are preserved 10 meters below the streets of Belgrade, and enjoy perfectly paired wine and snacks as you learn ancient uses of wine and get expert advice on balancing wine and food. For those wishing a more active adventure, join a guided bike tour. (B,L,D)

Discover Novi Sad, the “Serbian Athens,” on a walking tour to Dunavski Park and through Stari Grad, the Old Town center. If you prefer a more active exploration, join a guided biking tour or hike to Petrovaradin Fortress, a mighty stronghold no enemy has ever breached. Or, learn how to prepare traditional Vojvodina cuisine by a chef and local homemakers and enjoy a taste of your culinary creation. Later in the day, cruise to Vukovar, a Croatian symbol of resistance, which you’ll better understand on your city tour showcasing the Ovčara Memorial and Eltz Castle. Alternatively, choose a wine tasting in Ilok, a center of wine production since Roman times, where you’ll sample its famous Grasevina, Traminac and Frankovka wines. (B,L,D)

Visit Pécs, founded more than 2,000 years ago by the Romans, and the UNESCO-designated Christian Necropolis; St. Peter’s Basilica, the city’s main Catholic cathedral along with its catacombs; and Széchenyi Square, the heart of Old Town Pécs. You will also see the Mosque of Pasha Qasim the Victorious, one of the symbols of the city. Or for wine connoisseurs, you’ll want to go to the Szekszárd wine region, one of the oldest red-wine-growing areas in Hungary, established more than 2,000 years ago. You may also take an exhilarating guided bike tour from Mohács through Danube-Drava National Park. (B,L,D)

Disembark the ship in Budapest and prepare for your flight home. (B)
Need more information?
Having trouble deciding which cruise is right for you?
Call Us Today at 1.888.804.CRUISE (2784)
Back To Itineraries