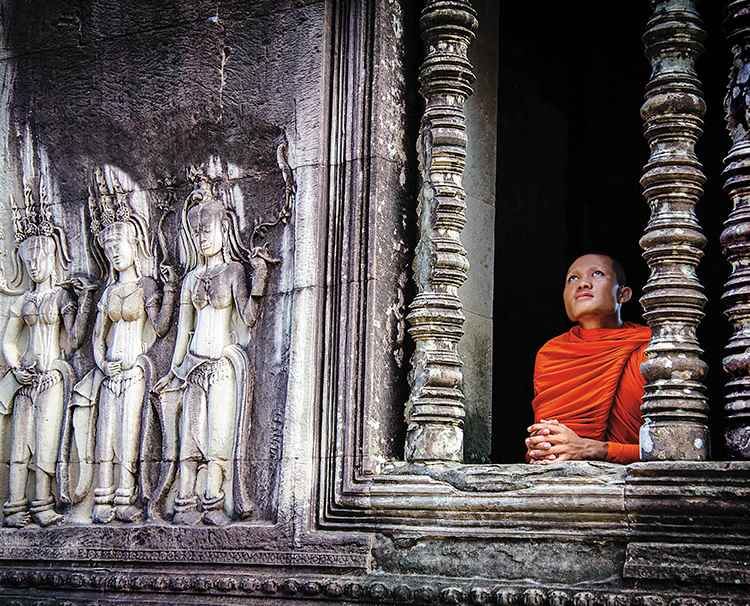 Riches of the Mekong 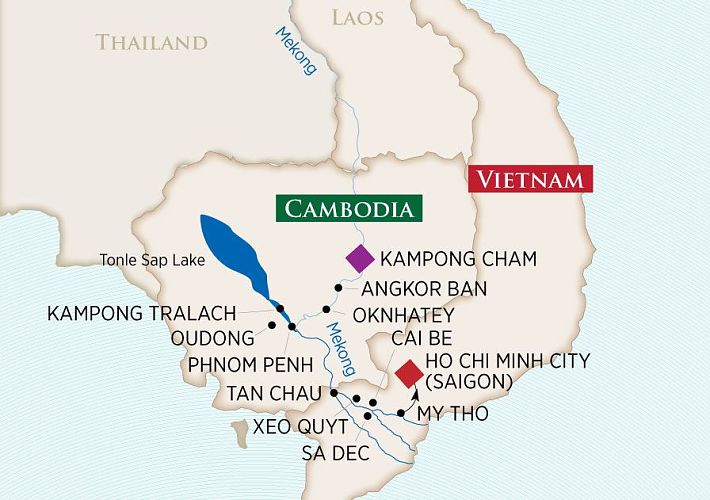 Cruise along the Mekong through Cambodia and Vietnam as you are transported back in time to another era, where the rhythms of the countryside move at a slower pace and allow for a fascinating glimpse into a traditional way of life. Visit rural villages, colorful markets and a monastery, where you will receive a special Buddhist blessing by monks. Delve into the peaks and valleys of Cambodia’s history in the Royal Palace and National Museums of its beautiful capital, Phnom Penh. Witness skilled artisans who create exquisite handicrafts and delicacies, and be treated to authentic experiences, including rides via oxcart, tut tut and trishaw. On this transformative journey, the Mekong truly reveals a vibrant world along its shores.
Request More Information 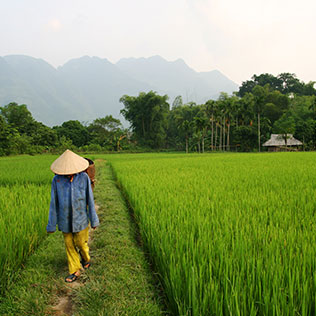 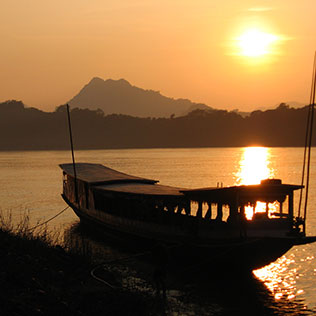 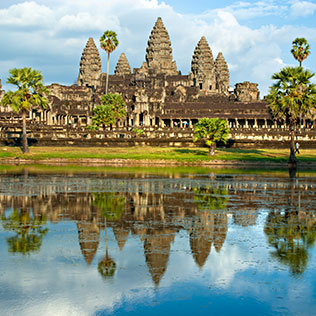 Transfer via motorcoach from Siem Reap to the AmaDara in Kampong Cham for your seven-night cruise. Your afternoon excursion takes you to the Twin Mountains, known as Phnom Pros and Phnom Srei (male and female mountains). In the annals of Khmer legend, the twin mountains were formed as the result of a competition between the men and women of an ancient Cambodian kingdom to resolve which gender would be responsible for wedding proposals. As the story goes, the women lit a fire at night, which made the men believe the sun was rising. As a result, the men stopped working and the women won the competition. Thus, men still need to ask the women's parents for permission and Phnom Srei is higher than Phnom Pros. Later, join fellow guests for an evening Welcome Dinner. (L,D)

*All cruise only guests should meet us at Sofitel Angkor hotel in Siem Reap at 8:00 am on Embarkation day to join the transfer to the ship in Kampong Cham. We recommend that you fly into Siem Reap at least one day prior to embarkation; please inquire about important arrival arrangements prior to your cruise.

During the morning, go on a walking tour to Angkor Ban, one of the few villages in Cambodia that was not destroyed under the Khmer Rouge regime in the 1970s. Here people still live in their traditional wooden abodes and keep their old cultural traditions alive. Hundreds of wooden houses stand intact on stilts, shaded with banana trees, among the hustle and bustle of the daily agricultural on-going of the local villagers. After visiting here, the ship sails to Oknhatey or “Silk Island,” located on the lush banks of the Mekong River. This island is known for its rich tradition of silk weaving. While here, you’ll visit a local elementary school and observe the traditional silk weaving that have been preserved for centuries. Your ship moors in Oknhatey village. (B,L,D)

*Based on seasonality, the port of Angkor Ban may be inaccessible from August - September. During this time, Wat Hanchey will replace Angkor Ban as the port of call.

Your cruise continues to sail to Phnom Penh, the capital of Cambodia. The morning excursion takes you to Oudong, Cambodia’s former royal capital from the early 17th century until 1866. Today, Oudong is a place of pilgrimage for Cambodians. While here, be treated to a memorable Buddhist Blessing Ceremony at a monastery. After visiting Oudong, be treated to a truly authentic excursion, an oxcart ride through a local village Kampong Tralach. Later in the day, experience Phnom Penh via a tuk tuk ride and be enchanted by the city's French Colonial architecture and tree-lined boulevards set amidst monumental Angkorian architecture. After returning to the ship, enjoy Khmer folk dancing performed by local children in the Saigon Lounge. (B,L,D)

This morning’s excursion takes you to Cambodia’s infamous Killing Fields and the Khmer Rouge’s grim Tuol Sleng S21 detention center (Genocide Museum). Alternatively, you may wish to shop for unique treasures at the bustling yellow-colored Central Market. After lunch on board, you’ll explore the highlights of the city, followed by a visit to the Royal Palace, the spectacular Silver Pagoda and the National Museum, which has an outstanding collection of Khmer crafts. (B,L,D)

Spend the day cruising the Mekong River as your ship crosses the border into Vietnam. (B,L,D)

Visit Tan Chau, a small Mekong River town unspoiled by tourism. You will have the opportunity to enjoy an authentic experience via a traditional “xe-loi” (trishaw) ride around the town, with stops at silk-making and rattan mat workshops, followed by a boat ride through the narrow channels of the Mekong River to “Evergreen Island.” Alternatively, take a boat ride to Evergreen Island and return to Tan Chau, where you will visit a rattan mat workshop. Later in the day, cruise to Sa Dec. (B,L,D)

Once ashore in Sa Dec, tour the town where French writer Marguerite Duras spent many years in her youth. Visit a colorful local market and the 19th-century house of Mr. Huynh Thuy Le, Duras’ Chinese paramour, on whom her prize-winning novel “The Lover” is said to be based. Later, board a motorcoach for Xeo Quyt, once used as a military base during the French war and now an important ecological site. You will have an opportunity to visit candy and rice paper making workshops, and the historic Kiet Old House. In Cai Be, cap the day off with a festive Farewell Dinner on board. (B,L,D)

Your cruise concludes in My Tho Port, where you’ll disembark and transfer via motorcoach from My Tho Port to Ho Chi Minh city. (B)

*Guests booking cruise only will be transferred from the ship to Sofitel Saigon Plaza in Ho Chi Minh City. We recommend that you schedule your onward flight to depart Ho Chi Minh after 2:30 pm today to avoid potential missed connections.
Need more information?
Having trouble deciding which cruise is right for you?
Call Us Today at 1.888.804.CRUISE (2784)
Back To Itineraries