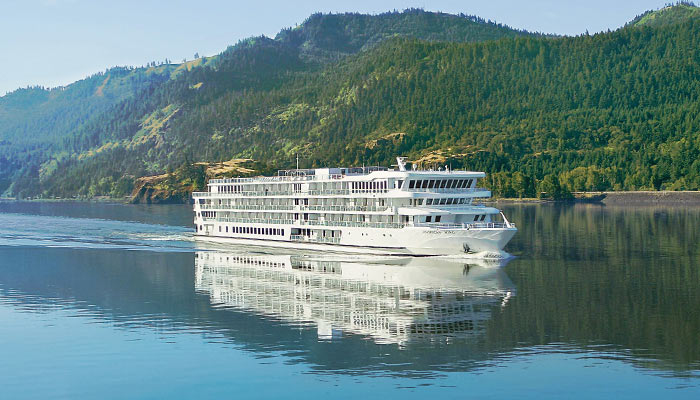 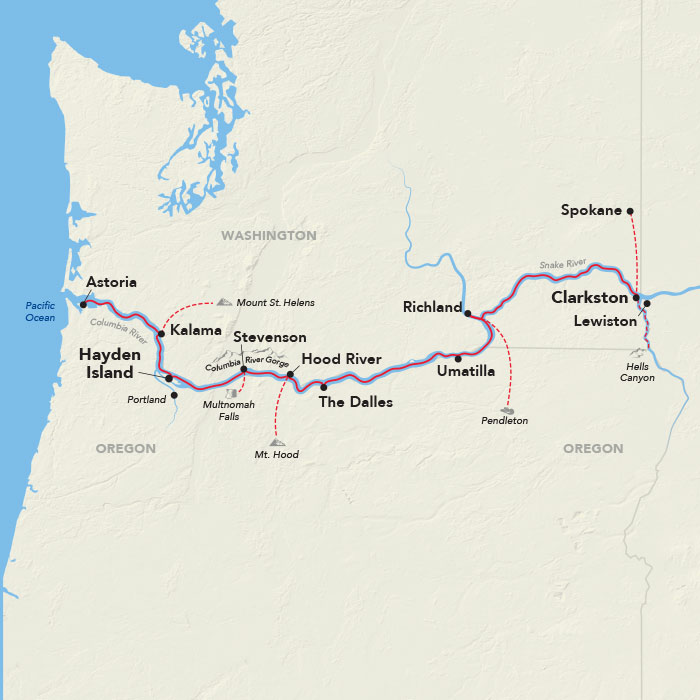 Explore the beauty and history of the Pacific Northwest on this 8-day Columbia and Snake Rivers Cruise as you follow the path of the famed Lewis and Clark Expedition. This popular cruise offers a beautiful panorama of environments that range from the lush forests of the Columbia River Gorge to the dramatic eruption of Mount St. Helens and the high desert bordering the Snake River’s Hells Canyon. Be inspired by the breathtaking natural views from the ship and witness the power of human engineering as the river’s famed lock and dam system lifts your ship more than 700 feet above sea level. Each day, excursions ashore are hosted by local guides to showcase the best of the Pacific Northwest. Sample the renowned area wines and regionally-inspired cuisine. Whether on an authentic paddlewheeler or a modern riverboat, you can enjoy comfortable and convenient exploration of the area’s most captivating destinations.

Onboard, relax and be treated to an unrivaled level of personalized service. Our enthusiastic all-American crew share with you a wonderful journey filled with historical tales, culinary delights, vibrant music, and new friends. Savor time onboard the ship in your spacious stateroom. From large windows and private balconies, enjoy the incredible, ever-changing landscape of the river valley. Delight in the ship’s delicious regional cuisine, socialize at the daily cocktail hour, and enjoy onboard guest speaker presentations to enhance your journey with fascinating stories and insights about the Columbia River Valley’s history, environment, and culture. Unwind each evening with a diverse array of talented regional performers in the intimate performance lounge.

All this is only available on the breathtaking new ships of American Cruise Lines. The 8-day Columbia and Snake River cruise sails between Hayden Island, Oregon and Clarkston, Washington.

Begin your journey in this vibrant region with majestic Mount Hood serving as a stunning backdrop. Situated between the waters of the Columbia and Willamette Rivers, the area's history is forever entwined with the fortunes of these great rivers. In the golden age of riverboats, sternwheelers crossed the waterfront while steam whistles and calliopes rang out across the water.

A nationally significant historic region at the western end of the Lewis & Clark Trail, Astoria is the oldest American settlement west of the Rockies. In the winter of 1805-06, the Lewis & Clark Corps of Discover Expedition was headquartered at Fort Clatsop. In 1955, a replica of the fort was built near the original site and was eventually named a National Monument.With its steep hills and beautiful Victorian homes, Astoria has been called the "Little San Francisco of the Pacific Northwest" and has a revitalized downtown ideal for shopping and dining.

Day 5 The Dalles/Hood River, OR

Pendleton is known for its beautiful countryside, indigenous Native American tribes, and thenetwork of underground tunnels created a century ago for illicit activities. The area is also famous for its lucrative wool trade in the 18th and 19th centuries. Visit The REACH Museum in Richland which illustrates the culture and history of the region through engaging exhibits, artifacts, and tours.

Or you may take advantage of our brand new Hells Canyon Post-Cruise Package which includes a 1-night hotel stay, Hells Canyon Jet Boat Adventure, breakfast, and transportation to the airport the following day.
Need more information?
Having trouble deciding which cruise is right for you?
Call Us Today at 1.888.804.CRUISE (2784)
Back To Itineraries