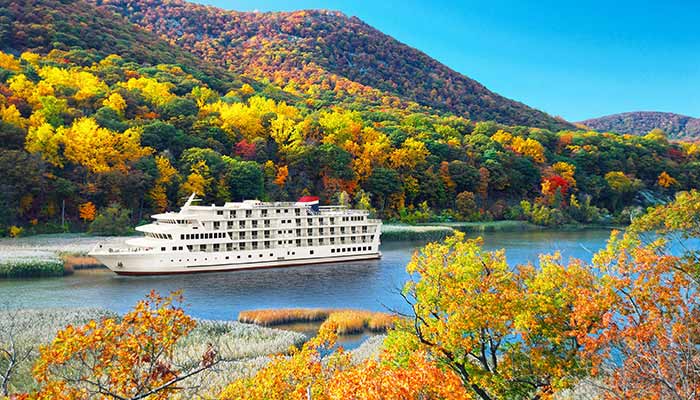 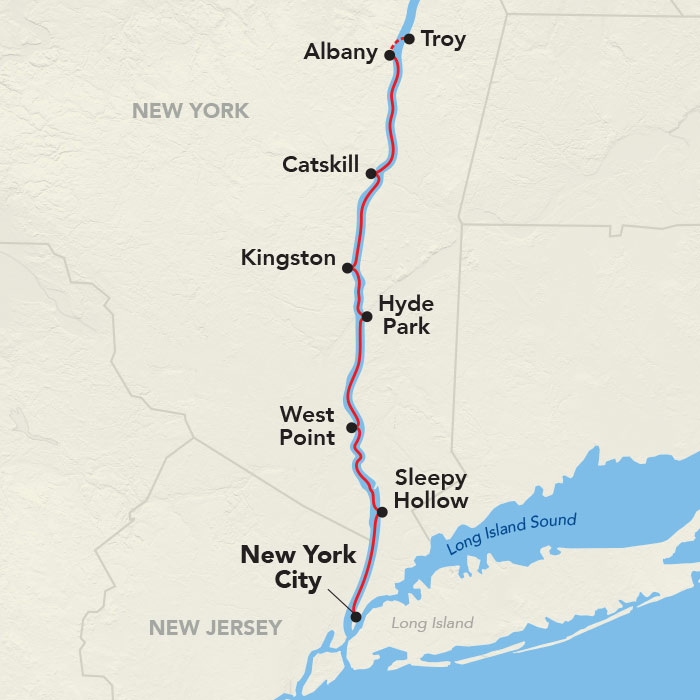 Surrounded by the Catskill Mountains on the western shore and the Taconic and Berkshire Hills to the east, the Hudson River is rich in both history and beauty. The cities and towns along the river date back to Dutch and English rule and feature some of the most magnificent architecture in America.

Our expert guides will lead you through these grand and historic sites including the Vanderbilt Mansion, the home of Franklin D. Roosevelt, and the Olana State Historic Site, home to one of the most influential Hudson River School Painters, Frederic Church.

At West Point Military Academy, walk the hallowed grounds traversed by some of the nation's greatest generals, and later visit the riverside town of Sleepy Hollow made famous by the great American writer Washington Irving.
Request More Information

New York City is the perfect destination to start your cruise along the Hudson River. Referred to as the city that doesn’t sleep, New York City is home to Broadway theaters, world-famous museums, iconic department stores, and Radio City Music Hall.

After boarding your ship, enjoy a delightful afternoon cruising from this bustling metropolitan area to the idyllic Hudson River region.

The United States Military Academy at West Point offers visitors the opportunity to walk on the hallowed grounds once traversed by some of the nation's greatest generals. Founded in 1802 by an act of Congress, the Academy has been of significant military importance to America. Tour the West Point Museum and Cadet Chapel, while viewing magnificent vistas of the Hudson Valley from atop the campus grounds.

When the steamboat debuted in 1807, the Hudson River became a waterway of leisurely travel. Kingston preserves the heritage of the region at the Hudson River Maritime Museum. Kingston is also located in an area of the Hudson River often referred to as "Millionaires Row," replete with palatial estates and grand mansions built by wealthy New York businessmen as a summer retreat.

Due to Hyde Park’s natural beauty and proximity to the city, families such as the Astors and Vanderbilts built weekend homes nearby. The area is most famously known as the birthplace of U.S. President Franklin D. Roosevelt and is the site of the Franklin D. Roosevelt Presidential Library and Museum, as well as his home, Springwood Estate, which is designated as a National Historic Site.

The city of Albany was discovered by Henry Hudson in 1609 on a failed attempt to find an expedited passage to China for the Dutch East India Company. Today, the capital city of New York welcomes visitors with majestic architecture and grand views of the beautiful Hudson River Valley. Be sure to explore the New York State Museum and the newly renovated State Capitol building, originally built in the late 1800s.

The scenic beauty of the Catskills has long been an inspiration to artists, writers, and naturalists who draw inspiration from its tranquil forests and expansive mountain landscapes. Explore the Hudson River School Art Trail, which includes the Thomas Cole National Historic Site in Catskill village, and sites like Kaaterskill Falls and Sunset Rock, which inspired 19th-century landscape painters.

The riverside town of Sleepy Hollow is forever immortalized in the works of one of the country's first great writers, Washington Irving. The author found inspiration in the Hudson Valley, creating legendary stories like Rip Van Winkle. Today, Irving's country home, Sunnyside, is a National Historic Landmark and welcomes visitors with tales of the man himself.

As we approach New York City, admire its famous skyline with buildings that disappear into the clouds. Once you have docked in Manhattan, experience all that this vibrant city has to offer. American Cruise Lines has a variety of shore excursions to suite your preferences, from freestyle exploration to guided excursions.

End your journey, where it began in the vibrant city of Manhattan. Reflect upon your wonderful adventure as you begin your travels home. Or, stay an extra day or two to explore more.
Need more information?
Having trouble deciding which cruise is right for you?
Call Us Today at 1.888.804.CRUISE (2784)
Back To Itineraries