8 Day U River Cruise from Frankfurt to Amsterdam 2023 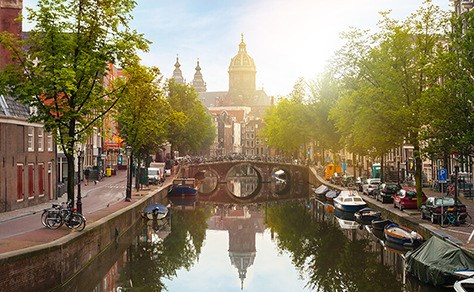 Rolling on the Rhine

Amsterdam is just the beginning. On this cruise along the Rhine river, you’ll have three days to spend in this laid-back and forward-thinking Dutch hotspot, along with stops in the port-town of Hoorn, urban Cologne, and winegrowing Rüdesheim. You’ll spend several nights out on the town. And you’ll get your fix of famous artwork, incredible scenery, Dutch cheese, German beer and so much more on this in-depth look into European history and culture. Who will enjoy this cruise? Modern and active, U cruises are designed for those with a passion for exploring, a taste for authentic adventures and a penchant for having fun. Though not as fully inclusive as Uniworld cruises, U cruises come with all you need to enjoy your travels, as well as plenty of options for add-ons should you want them. If you’re looking for a unique and immersive travel experience, enjoy socializing with fellow travelers, would rather walk and bike on excursions than take a coach bus and prefer a casual atmosphere, you’ll love U.
Request More Information

Included — Intro to FrankfurtFind out exactly why Frankfurt is more than just a hub on this walking tour of the city. From great shopping to medieval buildings, there’s a lot to love.Included — Biking FrankfurtJoin your Wellbeing Coach and U Hosts on a bike ride along the beautiful Main river, with a well-deserved pit stop for an Apfelwein or local beer at a cozy river-side bar.U+ Excursion — Frankfurt on FootFollow your U Host into the heart of Frankfurt, a dynamic financial trade city with the most imposing skyline in all of Germany. You’ll head into the heart of the bustling city to catch Kleinmarkthalle, an amazing market hall welcoming 63 vendors in 156 stalls that offer all kinds of fresh food, regional specialties and imported foods. Before hopping over to the Main Tower for a breathtaking view, don’t forget to sample some Ebbelwoi, Frankfurt’s famous cider. It will blow your taste buds away!

Included — Hiking Germania Monument & ForestWe’re headed to Niederwalddenkmal, a historic monument sitting above the town. Take in the panoramic views of old town and the shimmering waters of the Rhine as you hike to the top.Included — German CornersFollow your host on an evening walk through Koblenz, one of the country’s oldest and most beautiful towns. Vineyards, forests and exotic mountain ranges form the backdrop to a town with over 2,000 years of storied history.Included Night Out — Night at the CastleWhether you want to feel like royalty or look for ghosts, a night in a medieval castle is the way to do it. We’ll explore Rheinstein Castle, drink some wine in the gardens and learn about its history from the owners.U+ Excursion — Abbey WineFor 900 years, the Eberbach Monastery has been making wine – most notably Riesling wine. We’ll take a tour of the Abbey by candlelight and see the historical “Cabinet Cellar,” the cloisters and more while learning about the monastery’s fascinating history.U+ Excursion — Wine TimeFollow your U Host to RheinWeinWelt, an interactive wine tasting experience. After a short introduction to the 14 wine rooms and wine “slot machines,” you’ll get 10 tokens to take with you. Use your tokens to try samples of different wines of your choosing, each stored in their own tanks with helpful descriptions. Whenever you need a break you can always head back to the main hall where cheese plates and other local treats will be waiting for you.

Included — Rhine RiderWhile this bike ride isn’t steep, it is long. We’re setting off on a 31-mile bike ride down the Rhine River, seeing plenty of parks and vineyards along the way.Included — Intro to CologneOf course, you’ll see the Cathedral but there’s more to this town than that. Get a feel for old town, which is as quaint and colorful as a neighborhood can be, along with some of our favorite spots.U+ Excursion — Cologne in DepthTreat yourself to the best of this city with samplings of Kölsch beer, Cologne chocolate and the famous perfume, “Eau de Cologne.” You’ll also see famous sights including the Hohenzollern Bridge.

Included — U Host Walk into WeselIncluded — Wesel Bike TourWhile razed during WWII, today Wesel is a beautiful contrast of old and new. We’ll bike around town and see harbor installations, Auesee Lake and Willibrord Cathedral.U+ Excursion — MAKE TRAVEL MATTER® Experience: Apple PlantationSince 1867, the Clostermann family has been growing fruit at Neuhollandshof. Take a tour of their plantation, see how an apple goes from the tree to cider and taste some of their specialties.

Included — Choice of "Amstagram Tour" or "Secrets of Amsterdam"U+ Excursion — Six Senses of AmsterdamNamed because you’ll be using all of your senses on this deep dive into the local food scene. We don’t ruin the surprise, but we can say: Dutch apple pie, Gouda cheese, and stroopwafels. Hungry yet?U+ Excursion — Canals and CafésWhat better way to explore Amsterdam’s canals than by water? Hop aboard an electric canal boat where, on top of the hundreds of bridges, bicycles, towers and waterways, you will sail along world famous sites like the Red Light District and the Dancing Houses. Stop off at a waterside café for an included drink to top off your introduction to Amsterdam.U+ Excursion — By Water and WindGet to know the scenic neighborhood of Zaanse Schans, built along the River Zaan and home to some of the most stunning and historic windmills in Europe. Learn all about the history on a visit to a local museum and the working windmill. This neighborhood is a treasure trove of cute crafts, local shops and the most idyllic scenery you could ever imagine.U+ Excursion — Amsterdam Old and NewThere’s something for everyone in Amsterdam – and this is your chance to find it. We’ll explore the city by bike, see the sights and talk about Amsterdam’s fascinating history.