8 Day U River Cruise from Vienna to Belgrade 2023 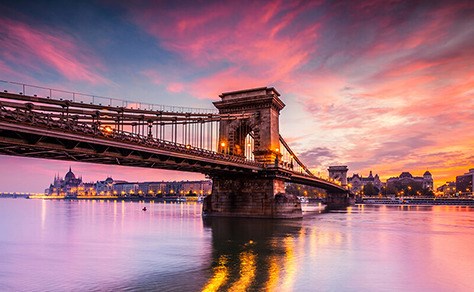 From imperial rule, communist regimes, and everything in between, this cruise is an enticing look at the past set against a backdrop of vibrant Vienna, elegant and easy-going Novi Sad, Budapest’s dramatic architecture, and the perfectly picturesque landscapes along the way. You’ll sip some of Europe’s best white wine in Mohács, wander through Buda and Pest, and dive into the breathtaking natural scenes of Belgrade with a bike ride to “Belgrade’s Sea” or a kayaking trip to Great War Island. Who will enjoy this cruise? Modern and active, U cruises are designed for those with a passion for exploring, a taste for authentic adventures and a penchant for having fun. Though not as fully inclusive as Uniworld cruises, U cruises come with all you need to enjoy your travels, as well as plenty of options for add-ons should you want them. If you’re looking for a unique and immersive travel experience, enjoy socializing with fellow travelers, would rather walk and bike on excursions than take a coach bus and prefer a casual atmosphere, you’ll love U.
Request More Information

Included — Stephansplatz MetroExplore Vienna on your own. We’ll guide you on the metro to Stephansplatz, the heart of the city. You can shop, stop in a café or pub, or explore the sights. We’ll be happy to give you recommendations.U+ Excursion — Vienna's BestIt’s hard to decide what’s the best in Vienna when it’s all so good— but we promise you’ll see a lot. You’ll get a feel for the city, taste some specialties and we’ll point out a few cafés you should definitely return to.U+ Excursion — Schönbrunn After HoursWe’re pretty sure it’s everyone’s dream to be in a castle after it’s closed. We’re doing it at Schönbrunn Palace—an architectural marvel. You’ll take a guided tour and see the quarters of the emperor and empress.U+ Excursion — Rock Me, AmadeusWhile the name of this show is a tribute to the famous song, this concert includes classical music of famous composers like Mozart and Strauss.

Included — Bohemian Dreamin'As artistic as they come, Bratislava’s Old Town is a showstopper. Get ready for colorful buildings, quaint squares and remarkable architecture at every turn.U+ Excursion — Retro BratislavaPile into a Czechoslovak Škoda car and get ready for your retro adventure in Bratislava! Set off on a tour to see historical monuments from the communist era and hear stories from those who lived it.U+ Excursion — Taste of BratislavaWhile a small city, there’s so much to see, and taste, here. We’ll walk through courtyards, curvy alleys and medieval streets while learning Bratislava’s history. Beer and savory Slovakian treats await you at the end.

Included — Budapest’s BestWe’re certain this tour alone will make you fall in love. We’ll take you to one of Budapest’s famous ruin bars, a concept unique to this city. Of course, no tour would be complete without passing by the legendary Parliament building and a stop at a delicious food hall. You’re in for a treat.Included — The Bright Lights of BudapestBudapest dazzles at night. We’ll explore this vibrant city once the sun goes down to see it fully illuminated. Afterwards, you’ll have the opportunity to explore on your own – we recommend checking out the famous ruin pubs.U+ Excursion — Budapest Rock HospitalDig deep into the history of Budapest's underground...literally...to uncover the secrets of the subterranean Hospital in the Rock. Steeped in Cold War mystique, this abandoned hospital was transformed into a secret nuclear bomb shelter—and hospital/torture chamber for prisoners—during the height of US/Soviet tensions in the 1950s. It was so secret that once it was abandoned in 1970, a single couple continued to live here as caretakers, telling no one what they did. Tour this cavernous enigma where original hospital equipment and more than 200 wax figures representing the staff who worked here haunt this site of heroism and horror.U+ Excursion — Soak It InOf course, you haven’t done Budapest until you’ve visited one of their thermal baths. Following a hike up to Gellért Hill, we’re headed to Gellért Spa, which is as much of a spa as it is a true work of art. This stunning 13th-century Art Nouveau building has both indoor and outdoor pools and significantly less crowds.

U+ Excursion — Croatia Day TripA neighbor of Hungary, Croatia is too beautiful to miss. We’ll take a bus across the border, where you’ll have a traditional Croatian lunch with a local family. After, we’ll head to the town of Karanac, which houses a famous museum and one of the best restaurants in the country.U+ Excursion — Pécs Marks the SpotTime to show us your competitive side! Teams set out on a treasure hunt through the city to find notable landmarks with clues and surprises awaiting you each step of the way. Guides will be available to give you hints and orient you through the city. Grab a celebratory drink at the end and hear stories about the amazing places you have seen.Included — Bike to MohácsA short bike ride will take us to a family-owned watermill that can be powered by the river or body muscle. It’s time to find out if you have the strength to power a windmill. Afterwards, take a swim in the river.

Included — Intro to Novi SadAs the second largest city in Serbia, there’s plenty to see here. We’ll take you on a walk around town where you can see some of the best sights, and find out where you want to explore on your own.U+ Excursion — Cooking Class Farm to TableSitting directly between the East and West, Serbia has carved out its own distinct cuisine, pulling inspiration from European and Middle Eastern dishes. Try out your culinary skills as you taste and test out a few staple dishes using locally-grown ingredients. Vegetarians and vegans beware, Serbian cuisine is very meat-centric.U+ Excursion — Canoe the DanubeEncounter the thrill of the river by canoeing through the beautiful blue Danube. Experience the Serbian countryside in a new light, then finish your experience with a traditional fisherman's meal.U+ Excursion — Petrovaradin P.M.Overlooking the city of Novi Sad, Petrovaradin Fortress stands as one of the largest fortresses in Europe. Dating back to the 18th century, this historic fort now acts as an arts center for the city, hosting music festivals and events throughout the year. Discover the legends and stories of this fortress connected to its underground tunnels on this evening walk.

Included — Belgrade's BestOne of the oldest cities on the continent, Belgrade seamlessly blends old and new with its high culture and fun-loving spirit. We’ll show you some of the city’s most important—and beautiful—buildings, while tasting traditional Serbian snacks.Included — Changing GearsRise and shine! Today we’re biking to the Ada Ciganlija recreation area, a natural escape for the city dwellers of Belgrade complete with a golf course, great cafés and a lake that many refer to as Belgrade’s Sea.U+ Excursion — Paddle OnAn adventure awaits on this kayak excursion to Great War Island, a green oasis situated where the Sava and Danube Rivers meet. If you’re fortunate, you might spot some of the creatures that inhabit the island before heading back to the hustle and bustle of the city.U+ Excursion — Belgrade Below GroundLagums, or cellars, have a fascinating history in Belgrade. We’ll be exploring one that has been turned into a wine cellar. You’ll taste Serbian wines, enjoy a few bites and learn about the history of lagums.