8 Day U River Cruise from Vienna to Nuremberg 2023 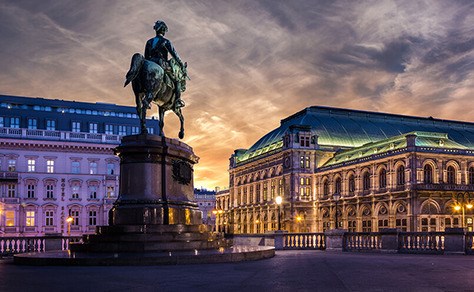 See the best of Germany and Austria on this stunning cruise down the Danube. Explore Regensburg through its web of meandering, yet delightful streets. Experience the cyber center of Linz and its edgy public art displays. Snap some photos of the famous, pastel-hued Melk Abbey as you take in the idyllic scenery of the Wachau Valley. Bike around Bavaria and test your culinary skills with Viennese schnitzel and apfelstrudel. Who will enjoy this cruise? Modern and active, U cruises are designed for those with a passion for exploring, a taste for authentic adventures and a penchant for having fun. Though not as fully inclusive as Uniworld cruises, U cruises come with all you need to enjoy your travels, as well as plenty of options for add-ons should you want them. If you’re looking for a unique and immersive travel experience, enjoy socializing with fellow travelers, would rather walk and bike on excursions than take a coach bus and prefer a casual atmosphere, you’ll love U.
Request More Information

Included — Vienna In DepthIt’s hard to decide what’s the best in Vienna when it’s all so good— but we promise you’ll see a lot. We’ll walk around the city, see famous landmarks and stop at Naschmarkt for cheese, wine and something sweet.U+ Excursion — Schönbrunn After HoursWe’re pretty sure it’s everyone’s dream to be in a castle after it’s closed. We’re doing it at Schönbrunn Palace—an architectural marvel. You’ll take a guided tour and see the quarters of the emperor and empress.U+ Excursion — Rock Me, AmadeusWhile the name of this show is a tribute to the famous song, this concert includes classical music of famous composers like Mozart and Strauss.

Included — Yoga in the VineyardsThere’s no better place for Savasana than in the vineyards of the Wachau Valley. And that’s just what you’ll be doing here.Included — Intro to KremsWhile the city isn’t too big, it’s rich in history. It’s where the Babenberg royal family set up the dukedom in 1120 and where the first Austrian coin was minted in 1130. Today, Krems is a thriving home for the arts. As we wander through the colorful streets, you’ll get a real feel for this city.Included — Choice of "Intro to Melk" or "Wachau on Wheels"Today you have your choice of one of these fascinating excursions in Melk: 1) INTRO TO MELK: While it’s not a big town, there’s still plenty to see. The main attraction being the Melk Abbey, founded in 1089 and still an active monastery; OR 2) WACHAU ON WHEELS: Get ready to bike the beautiful Wachau Valley. Ride alongside the sparkling Danube, inhale that gorgeous fresh air while taking in the sights of far off castles, vineyards, and quaint architecture. End the tour with a picnic, complete with a blanket and all. You earned it! U+ Excursion — Burg ClamWe're taking you to Clam Castle, the family home of the Counts of Clam for more than five centuries.

Included — Intro to LinzThe European Capital of Culture of 2009, Linz is a perfect mix of tradition and modern culture. We’ll walk around the city and you can take note of places you want to return to.U+ Excursion — Gossip Tour of SalzburgIf you’ve ever wanted to know everything, this is the tour for you. We’ll show you hidden parts of Salzburg, untold history and some great facts for your next trivia night.U+ Excursion — Look into Linz’s PastLearn all about Linz’ history while getting an exclusive look into some historic sights. We’ll even stop at the Limonistollen, sandstone bunkers that were used as beer and wine cellars until WWII when they became prison cells.U+ Excursion — Cider Farm Visit

Included — Scenic PassauHow does a view from a fortress sound? We’re taking a walking tour up to Veste Oberhaus. This castle was built in 1219 and is now a museum, a youth hostel and a restaurant.Included — Passau by BikeBiking around Passau is one of the best ways to explore Southern Bavaria. The city is filled with plenty of flat trails and very little traffic. We’ll bike around the river, on a few trails and through the village.U+ Excursion — Six Senses of BavariaFood, history and art all combine in this walking tour. Learn about the history, life and culture of Passau while enjoying pretzels, white sausage and beer.U+ Excursion — River SplashDespite the name, we promise you won’t get too wet on this tour, unless you stand up in the canoe. We’ll explore Passau and take some paddle boards and canoes onto the Ilz River.

Included — Medieval RegensburgFind out exactly why Regensburg is called Germany’s medieval miracle. This walk will take you through the most historic—and well preserved—parts of the city.U+ Excursion — Regensburg RevivedFrom animal fights to tightrope artists to public executions, this city has a fascinating history. See re-enactments, hear stories and get your fill of Bavarian cuisine. We’re taking you somewhere where their famous pork sausage is so beloved, the recipe hasn’t changed for 850 years.

Included — History of the Nuremberg TrialsCompletely destroyed during a five day bombing, and later the site of the famous Nuremberg trials, this tour will take you from the 1920s to the end of the war. A few sights include the former SS barracks, Congress Hall and room 600, where the trials took place. NOTE: The permanent exhibition at the Documentation Center will be closed until the fall of 2023. In its place, a special temporary exhibition may be available.