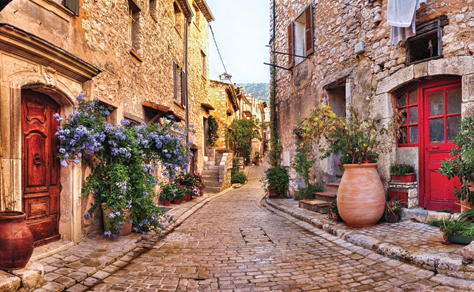 A journey of exquisite pleasures. Follow in the footsteps of Van Gogh, Cézanne and Gauguin on this exquisite journey through southern France; the same beautiful countryside and culture that inspired the masters will now inspire you. Cruise the Rhône and Saône rivers, enjoying the region’s incomparable wine and cuisine and discovering its many treasures—from the medieval wonders of UNESCO-designated Avignon to Lyon’s lively river banks. Stroll the very streets of Arles made famous by Van Gogh. Visit Avignon’s majestic Palace of the Popes. Experience “Village Day” in enchanting Viviers, including a recital of music composed by Bach and Handel. And for those who wish for a more active exploration of the area, you can kayak on the tranquil Gardon River under the UNESCO-designated Pont du Gard; hike the steepest vineyards on the Rhône; and pedal through the city designed with bike riders in mind while in Lyon. Explore unforgettable “Burgundy & Provence” where tradition is as deeply rooted as the historic grapevines on the hills. Who will enjoy this cruise? Travelers wishing to walk through the lands that inspired Van Gogh, Cézanne and Gauguin. History buffs, gastronomes and wine connoisseurs.
Request More Information

Arrive at Marseille International Airport. If your cruise package includes a group arrival transfer or if you have purchased a private arrival transfer, you will be greeted by a Uniworld representative and transferred to the ship docked in Avignon.

Disembark the ship. If your cruise package includes a group departure transfer or if you have purchased a private departure transfer, you will be transferred to Lyon-Saint Exupéry Airport for your flight home. Alternatively, you can continue your adventure with an extension to Paris.